Sophos Home Free is the free edition of Sophos Home, belonging to a company that has been developing security software for more than 30 years. Initially this company has highlighted in the commercialization of security products destined to the companies and the corporative sector. However, gradually has been gaining ground in the market of security products at home and now its free antivirus is the height of the best brands of renown. 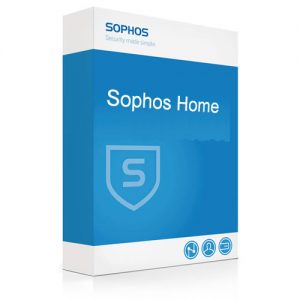 The free version of Sophos contains all the necessary options for the basic security of your computer by means of real-time detection and web filtering. This antivirus is available for Windows and Mac.

Some modules included in the Sophos Home Premium payment version are included in the free version only temporarily as a trial. Some of these advanced features are rasomwarez protections, secure banking transactions, advanced malware removal, real-time email threat monitoring and blocking, and chat support, among others.

To download Sophos Home Free You must create an account on the site to register the product. This process consists of filling out a simple form by entering a valid mail to obtain the free license.

Sophos Home Free is not exactly a lightweight antivirus. Once installed, approximately 12 system processes are added, which are usually above average and in terms of RAM memory, their average consumption is around 400 MB.

Once the installation is complete add a small icon to the system tray that clicking on it we have direct access to the interface. Its design has been simplified to facilitate access to the main menus that are to scan my PC and manage the security options.

An interesting feature of the program is that it can be configured for remote access. This is useful in the case that we want to install the antivirus in a machine without access to the configuration to not change the preconfigured options, like for example, to install the program in the computer of our children.

Through the Protection tab we can enable or disable included modules such as real-time protection, web protection, download monitoring and unwanted program detection.

Web filtering allows you to voluntarily activate and deactivate sites that we want to remain inaccessible, such as adult sites, legislated substances, violence, etc. This lock is carried out by device, so that once the modules are turned on or off, they will remain so for all users who have an account on that computer.

The available scan option is run remotely on the Sophos servers. Once the scanner is finished, the antivirus will indicate the security status it is in and the possible threats detected.

As with other antivirus scans on this page, Sophos products are not analyzed as assiduously on test sites as other reputable brands. The last available test of AV-comparative realWorld Protection test is of the 2016 whose results did not get too good position in the ranking with a 96.2% placing in the number 18 of the 19 antivirus analyzed. The tests also carried out by AV-Comparative in April 2018 for Android, yielded very different results with a creditable percentage of 100% in real-time threat detection.

The tests conducted by AV-Test on Sophos’s Mac products also gave 100% of detections to the security company. However, this scale would obviously be much more impressionable in a test for Windows, which is usually the first target of cybercriminals, because for MAC there are many fewer threats and native system tools by themselves already have a filter detection Pretty good.

Sophos Home Free is a free and simple antivirus to protect multiple desktops at the same time and synchronize devices online. However, the free version includes very few customization options by default and few security extras that could be a handicap for more experienced users.